With numerous years of DJing experience under his belt, his favorite styles of music are the 70's 80's and 90's music. His arsenal of song selections range from slow oldies to modern dance, from big band and beach to hip-hop and R&B, from golden rock & roll classics to modern metal and hard rock classics.

Tracy started off working in bars and nightclubs serving drinks. With a flair for music, he learned from many local talented disc jockeys how to read a crowd and play what they wanted to hear. Breaking out from behind the bar, and into the music scene, Tracy learned the craft by being part of the road crew and lighting technician for award winning DJs.

Having learned the basics and more, Tracy looked to improve upon what he had learned. He became the lead DJ for a 3 man show that traveled the east coast with an interactive and entertaining show. With numerous weddings and corporate events under his belt, he had mastered the private party environment as a member of this team. However, he felt there were still pieces that he was missing.

Although he had established his own mobile DJ business, Tracy still wanted a taste of the night club environment. In 2003 he found his opportunity and moved into the DJ booth at Club 54 in Raleigh. He went from playing on Thursday nights to playing Thursday and Saturday nights by the end of his tenure there. By learning the club side of the DJ business, Tracy was able to improve his mobile DJ show by understanding a different brand of music and entertainment style. Tracy's last club jobs were at TJ's Night Life in Raleigh, NC and O'Dwyers Irish Pub in Wake Forest, NC.

Today, Tracy resides in Wake Forest, North Carolina with his wife and children. Tracy is also an accomplished graphic artist and web and print designer, illustrator and animator. To see a sample of Tracy's artwork, visit his portfolio at http://tracy.telenko.com.

Bowtie Mobile DJ and Sound is a member of the Triangle Disc Jockey Association and is a proud member in good standing. 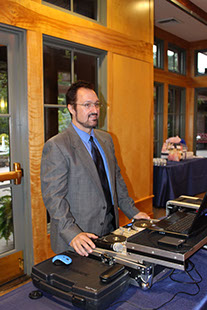